STAY ON TOP OF YOUR PHOTOS

The culture of sharing images

The very first desire to share an image is undoubtedly that of transmitting the feelings it arouses while looking at it.

If words are limited by our vocabulary, photography can take over because it allows us to break down these boundaries and go beyond our reason to touch our being and unfold sensations that our own words sometimes cannot reach. The emergence of social networks in recent years has provided us with extraordinary territories not only to circulate ideas and promote exchanges, but also to share photos: aesthetic or disturbing, intimate or news, iconic or symbolic. When we decide to post a photo on our “wall,” it  is a very significant act because it says a lot about ourselves.

The social network, XXL field of expression for the image

“The digital revolution,” explains André Gunthert, historian of the image, “will first of all make the image explode in terms of its production and mobility. The fact of seeing images, making images, discussing them, sending them, putting them up for debate, has produced in a very short time, since 2010-2011, a new visual skill that has come to replace a non-existent education in the image.”

At one time, the image specialists had expert skills – but not the general public, who remained on the outside and were ultimately just consumers of visual production. This is no longer the case today. Internet users have a sharp eye for photography, and have access to ultra-high performance software that eliminates the need for a laboratory, which was once  accessible only to image professionals.

Today, photography enthusiasts collect images, often discovered on networks. A kind of personal library is established. And as in the library of any honest man, the choice of the readings reveals the intimate aspirations, tastes and universes which enchant its owner.

This cabinet of visual curiosities summons emotions and lists the territories that animate us: beauty, tenderness, poetry, the wow effect, memories, aspirations, the surges of the world or the bright side of life…. All this constitutes the foundation of this intimate catalogue, perhaps even an identity–a kind of modest and intellectual selfie, that of our inner being.

Game or personal challenge? The playful variations of sharing

Another example is the photographic ritornello game on network walls. A digital acquaintance invites you to publish a photo every day for a week or every Sunday for a month. The selection, once again, reflects your state of mind, your culture, your interests and even your positions. The major ingredient of this game is certainly the will to transmit. To share with others what exactly animates us this particular day. The photo is an indicator of a moment T of oneself.

From viewfinder to viewfinder? The field of exchange is not only epistolary

Another device existing on digital platforms, the image is a dialogue without words between photographers who exchange an image every day. A kind of diary with four hands and two smartphones. Here again, photography transcribes information beyond words. This daily relationship, not epistolary, draws the striking profile of a friendship, the very foundation of the sharing between two people, nourished by the same passion. 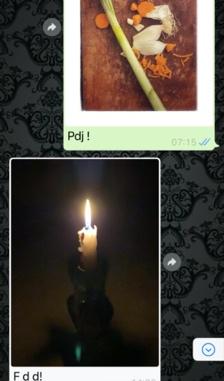 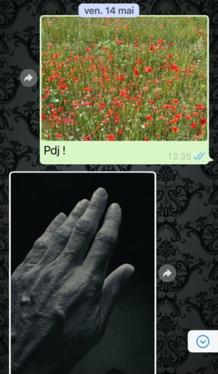 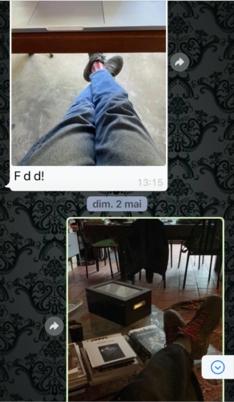 Sharing without signature: a certain idea of reappropriation?

Most of the time the signature of the person who conceived the picture is not mentioned because, explains André Gunthert, “…the images, once understood, are the object of reappropriations, of detour.” These images are subject to a new conversation, the one we have chosen. Through the act of posting the image at this moment, one wishes to say something to others, and there, the copyright does not matter. It is not so much the photographic work that is appreciated but what it conveys as an idea or underlines as a personal statement.

Other territories of sharing

What motivates the sending of a more disturbing image, one that takes a step aside? Is it to invite us to a deeper reflection? Depending on the subject and the intensity, the image will provoke a reaction, shake us up, take us out of our comfort zone; it intends to make us react. One thinks of Joel Peter Witkin‘s plastic images, elaborated with real human bodies, Eugene Richards‘ documentary photography on drug addiction in the United States or Lee Jeffries‘ work on the homeless.

To widen one’s field of vision, to apprehend the world in its happy or sordid dimensions – such are the implicit commands of these shares. Here, photography bears witness or captures a reality unknown to us, but once viewed it becomes indelibly inscribed in our visual culture, just like reading the pages of Primo Levi.

Sharing outside the comfort zone: possible or sometimes impossible?

Sometimes a disturbing photo even transcends information and becomes an icon of a drama. How can we not remember the photo of Nilufar Demir that has circulated so much on social networks and traditional media, that of the little Aylan Kurdi washed up on a European beach, a powerful image that people found difficult–yet were compelled–to share?

Image symbol: the photograph that escapes its author?

The image can also escape from the photographer himself, come to strike the collective conscience and challenge anyone who looks at it. Going beyond the photo, it becomes a symbol. It underlines pain, empathy and a whole range of feelings. It will be shared and reshared, and digital platforms contribute greatly to the multiplication of these exceptional photos, creating a circulation that quickly becomes exponential. These images distributed on social networks do not need any caption or comment. “The strength of these photographs alone symbolizes the failure that we are experiencing,” comments Virginie Spies, Le Nouvel Obs.

Become your own editor

The sharing of such symbolic images circulates meaning, and on the part of users it is a way of appropriating media space, of reclaiming it, of even envisaging a kind of editorial work in real time, as André Gunthert points out. Social networks have clearly allowed this field of application. Today, faced with the mistrust of traditional media, internet users, with the skills they have acquired in terms of images, have learned that they could take over this space and make it their own.

This visual circulation is only possible when it is applied from user to user, from friend to friend, but it cannot be extended to the public field because the question of copyright legitimately comes to the fore.

The power of emotion, a major vector of sharing?

At the end of these different reflections about sharing – its territory of expression, the idea of building a meaningful visual library, the different modes of transmission, whether in the form of an invitation or a conversation – it would be interesting to ask the question, “Why?” Why this desire to connect to the other or to others through an image often proposed without words or sentences? Wouldn’t the common denominator simply be emotion? The photos that arouse this feeling are the most diffused, and if we look closely, we notice that this emotion must be more powerful and must always surpass us for the sharing to take place. This is probably the real reason for sharing.

And you, what is your culture of sharing images and photos?

Discover our other Posts about Photography

Be the first to know about exciting CYME news and updates​

By clicking on Subscribe, you agree to receive email communications from CYME. You will be able to unsubscribe at any time by following the instructions in these messages. CYME respects your privacy and will not sell your contact information. For information about our collection and use of your personal information, our privacy and security practices and your data protection rights, please see our privacy policy.

Fill in your details and we’ll get back to you in no time.